Shore birds and waders are often just out of binocular and zoom lens range. For this reason, avid birders often lug around a ‘spotting scope’ to zoom-in on distant subjects. The best of the best are undoubtedly those made by Swarovski (yup, they don’t only manufacture expensive glass ornaments), but the higher-end models can cost as much as a second hand car! Thus began my quest to find a decent scope that wouldn’t break the bank.

After months of online research, I decided to purchase the gear from OZSCOPES: Australia’s leading retailer of telescopes, binoculars, and spotting scopes. Over the course of a couple weeks, the patient and knowledgeable folks at OZSCOPES exchanged dozens of emails with me to ensure that I got the most appropriate gear to fit my budget. I paid for the items by credit card over the phone, and within 2 days the following items were delivered to me by registered post:

The 1.6kg Celestron scope has an elegant but rugged feel to it, suggesting that it could produce clear views even after it got rattled around your car on a long day trip. The Saxon tripod is a beast though: it tips the scales at 10kg and looks like it could survive a nuclear explosion unscathed.

For $750 (or about the cost of my 18-200mm Canon lens!) I had a decent spotting scope rig that was perfect for digiscoping (i.e. attaching a digital camera to the scope to capture images). My aim was to be able to view live images of distant wildlife on the screen of a digital camera, thereby eliminating the need to squint one eye to look through the scope’s eyepiece (this is where the ‘T-Ring’ and ‘Digital Camera Adapter’ came into play).

The adapter allows a compact camera to be mounted over the eyepiece as shown in the photo below. The problem with this configuration (at least with my old Samsung ‘point-and-shoot’) is that the camera just couldn’t autofocus to produce a clear image. I suppose that a more advanced compact camera with a ‘manual focus’ feature would have no problems capturing decent images. However, until I buy a new compact camera, I probably will not be using the adapter for anything other than as a $128 paperweight.

I was far more pleased with the DSLR T-Ring though, since this worked a charm. The live image on the LCD screen was just as clear as looking through the scope with one eye, with the added benefit of multiple people being able to view the live image at the same time. It’s worth noting though, that my Canon EOS 600D (or Rebel T3i for readers in the Americas) automatically switches off the live view on the LCD screen after about 30 seconds to conserve battery power. There must be a way in the menu to increase this time, but I haven’t tried to fix it yet because it’s just a minor annoyance really.

View down the barrel (taken with an iPhone 5) 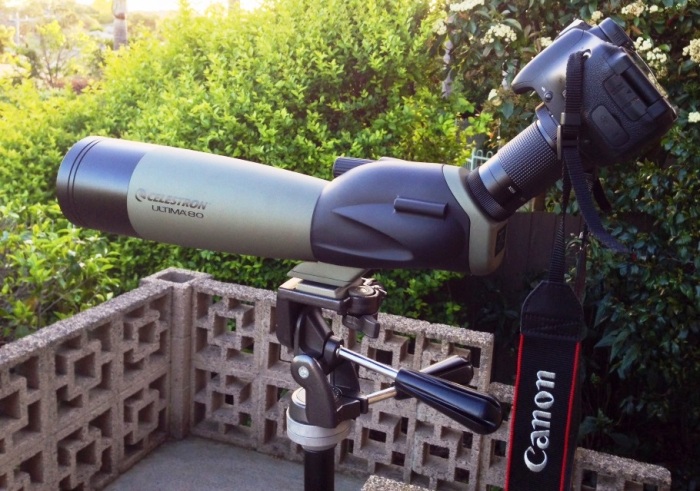 DSLR attached to scope with T-Ring 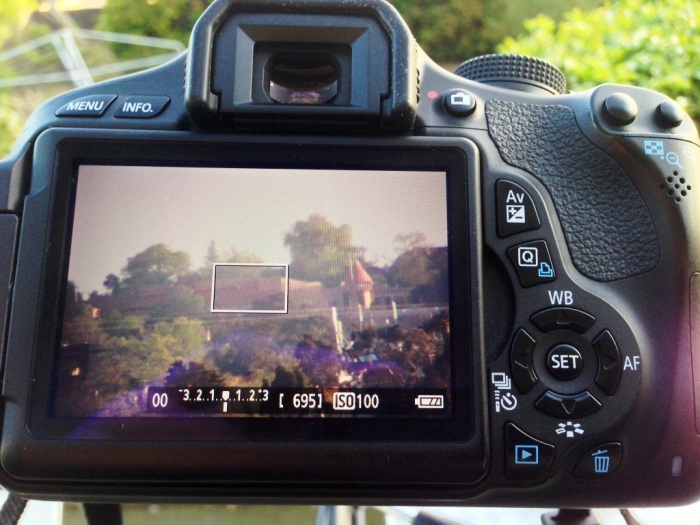 Live view of a house on the horizon in a different suburb!

When compared to a Swarovski scope (which I have been fortunate to use in the past), this rig just doesn’t have the optical clarity that a Swarovski has. (At less than one fifth of the price though, it is unrealistic to expect the Celestron scope to be on par with a Swarovski scope.) To get higher magnification views, more glass is needed in the scope, which translates into more weight; coupled with the heavy-duty tripod, be prepared to be lugging around more than 10kg of bulky gear. The digital images captured with the DSLR and T-Ring aren’t National Geographic quality, but if your aim is to view live images on an LCD screen and capture ‘ID shots’ at 60x magnification without spending more than $750, then this gear is perfect. I just can’t wait to use it in the field!

One thought on “Digiscoping For Dummies”