In late spring, there was a flurry of Eremaea reports of a Powerful Owl family in the Wilson Reserve, and since we live just a 10 minute drive away from Ivanhoe, we couldn’t pass up the opportunity to add a lifer to our list.

The Wilson Reserve isn’t large compared to some of the national parks we have visited over the years, since (according to a rough calculation on Google Maps) it covers an area of just 10 hectares. We drove along ‘The Boulevard’, thanking our lucky stars that it wasn’t during the Christmas period when thousands of people clog the street to see Melbourne’s best display of houses decorated with Christmas lights. We pulled in to the narrow ‘Irvine Road’, and parked in the large carpark at the end of the road, wedged between a small billabong, and an often busy football ground.

After enjoying magnificent views of the billabong and a pair of nesting Rainbow Lorikeets for all of one minute,we were immediately faced with our first dilemma: should we follow the circular path to the left or to the right? At 7pm, and with the light fading fast, our choice was critical to quickly finding the owls. In the end, the Grail Knight would have said “They chose…. wisely”. (We chose to go to the right.) 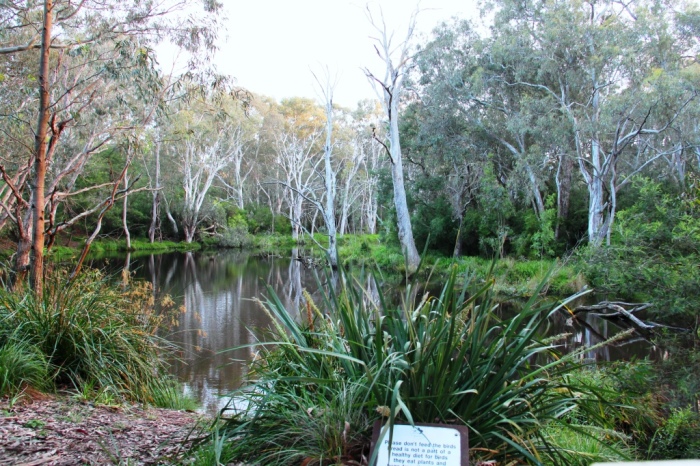 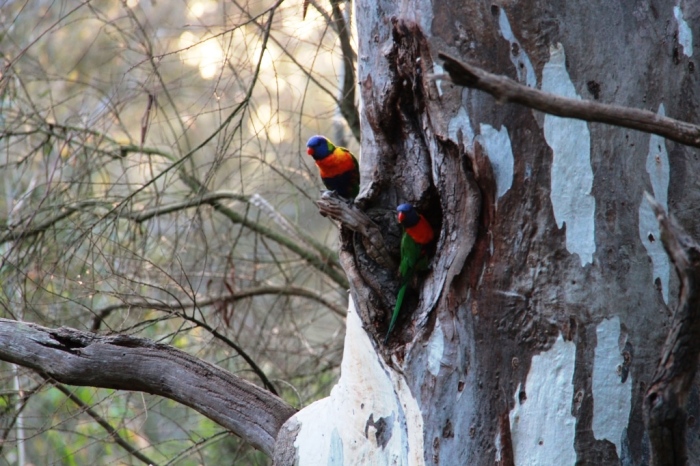 A pair of Rainbow Lorikeets

Now although the reserve covers about 10 hectares, finding a family of Powerful Owls is akin to finding a needle in a haystack, so this is where our research paid off. The reports on Eremaea did not give step by step directions to their roosting hideout, but a few birders posted photos, and in there was the first clue: the leaves surrounding the birds were large and bright green in colour, as compared to elongated and dull green/brown like stereotypical gum leaves. This suggested that the tree they were roosting in was a non-native tree (or at the very least, it wasn’t a familiar gum tree).

The second clue came from the field guide entries: the owls tend to roost on the limbs of leafy trees in quiet areas. Although it sounds like we were looking for a large tree with green leaves in a forest of trees, these two pieces of information were crucial to our success.

We started along the well-groomed path, quickly ticking Bell Miner (a lifer for Imka), Eastern Yellow Robin, Common Bronzewing, as well as the usual magpies and ravens etc., before turning ……

(I’ll not post the exact location of the owls since they roost there almost every year and birders are quite protective of them, but if you are a responsible birder and will be in the area in mid-late spring, send me a message asking for directions.)

…… I noticed some trodden grass which suggested that people had walked this way recently, so I thought I would go for a wander off the track. I stopped suddenly, because high up in the canopy, partly obscured by leaves, with only its silhouette visible in the fading light, was a large Powerful Owl!

Imka had wandered down another track so I excitedly ran back and called her over in hushed tones in case I scared it away. Imka was just as awestruck as I was – there in front of us was an owl, albeit with its back turned to us, in suburbia. We gingerly moved forward, camera clicking away and binoculars trained on our quarry. After taking dozens of photos from different angles, it hit us both at the same time: where was the chick?

Adult from a different angle

We feverishly scanned the canopy, and much to our relief (and surprise) the chick was on a nearby branch all along, and he was staring right at us! It was truly a magical moment for us to lock eyes with a not-too-petite ball of fluff, knowing that in mere months, those gold-ringed eyes would be seeking Ringtail and Brushtail Possums for dinner. 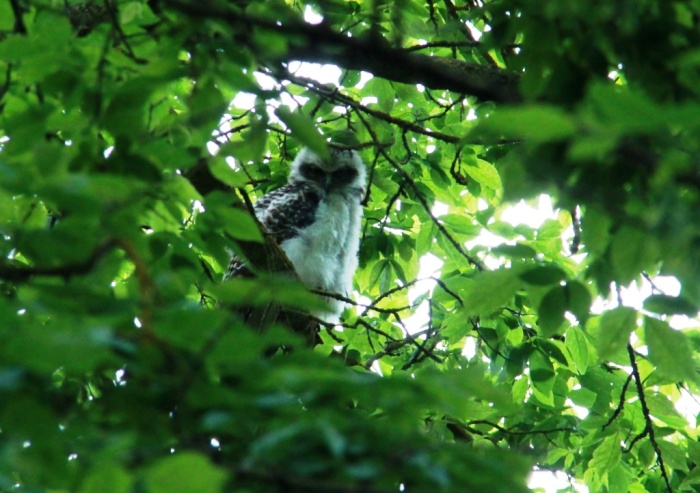 The chick never looked agitated or scared – instead, it appeared to be curious about the attention it was receiving on a daily basis from birdwatchers. Even though mom (or was it dad?) never turned to face us, we only spent about 10 minutes in total with the owls because we didn’t want them to get too stressed. It was undoubtedly one of our most memorable wildlife encounters ever, and we look forward to another (or the same) pair of Powerful Owls nesting in our neighbourhood next year.

UPDATE 1: I went looking for a reported Rufous Fantail (which I didn’t find) on Christmas Eve, and I am pleased to report that the Powerful Owl chick is still in its usual spot.

UPDATE 2: A reader of this blog (who contacted me for directions to the owls’ roosting site) emailed me today (10 January 2014) to say that all three owls were sighted. I just had to have a look for myself after work, but despite spotting only two owls, I got some cracking views (and photos!) of a parent. Unfortunately, it seems as though its left eye is cloudy: here’s hoping that its impaired vision does not adversely affect its hunting ability.

2 thoughts on “Powerful Owls in Ivanhoe”