As a birder, you have no doubt felt the crushing disappointment of a ‘dip’: you read consecutive reports of sightings in the area, you psyched yourself up, you left home at an ungodly hour with a full tank of petrol, you drove 200km in terrible weather conditions, and not only were your target species elusive, but a dozen other birders rubbed salt in your wound by ticking the species on the same day that you were there! We dipped out big time on a recent trip to the Great Ocean where we were on the hunt for reported Rufous Bristlebird, Blue-winged Parrot and assorted species of albatrosses, but it turned out to be an immensely enjoyable day-trip nonetheless.

Since we couldn’t overnight on the Great Ocean Road, we decided to visit just Anglesea Heath and Point Addis, but it was still a 300km round trip from the eastern suburbs! We planned to do the loop of Anglesea Heath first, and on the way home, we would stop at Point Addis. This turned out be a bad decision for bird watching, but a fantastic choice for mammal watching.

We spotted a Yellow-tailed Black Cockatoo flying across the start of the Great Ocean Road (which we thought was a sign of things to come), and by 9:30am we were in the seaside tourist town of Anglesea for a pitstop: my ‘Show the loo‘ app said that there was a toilet in the Coles Express (Shell) service station. With empty bladders (and a pack of ‘snake’ lollies bought out of courtesy for using the toilet) we were now well and truly on our birding adventure.

We headed back east along the Great Ocean Road (towards Melbourne) and after about 10km, we took a left on to Forest Road to do an anticlockwise circuit of Anglesea Heath. Many tracks crisscross Anglesea Heath, and Honeypots Track seemed as good as any track to try our luck for new species. 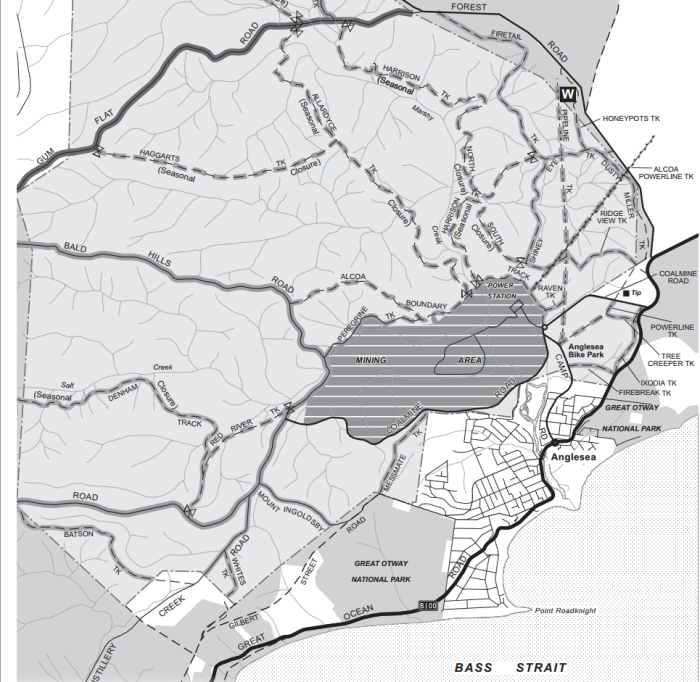 The annoying sound of dirt bikes often made listening for bird calls near impossible (not that we’re bird call experts anyway), but surprisingly, the birds didn’t seem too fussed by the commotion. We drove for a couple kilometres, quickly ticking a few common species like Brown Thornbill, Australian Magpie, and Little Raven, before doubling back due to a flooded track. We retraced our route, parked just off one of the many side tracks, and went for a bushwalk. Not half a kilometre along the track, we were confronted with an impassable pond in the middle of the road, even though it hadn’t rained for at least a week! Nonetheless, we still ticked a few more species (including Rufous Whistler and Black-faced Cuckoo-shrike), and Imka snapped a few dozen photos of wildflowers. (According to Parks Victoria, “about a quarter of Victoria’s plant species can be found here [Anglesea Heath] including over 80 different types of orchids“.)

We headed back on to Forest Road, and took a left at the fork on to Gum Flats Road. About 100m before the transition from tarmac to unsealed road, Imka exclaimed that she saw something really large hopping in the bushes, so I pulled over and reversed, expecting to see a kangaroo: it turned out that Imka had spotted a small herd of wild Fallow Deer! In Australia they are an introduced, feral and destructive species that is often shot by hunters, but they are such magnificent animals that we were quite pleased to have seen them. 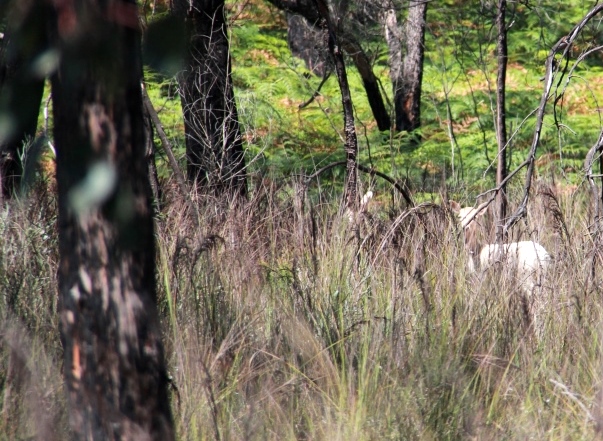 We saw many LBJs crossing the road at eye level, but we did manage to get a good ID photo of a Spotted Pardalote before taking a left on to Bald Hills Road. Although there was a post (and a rotting kangaroo!) at the intersection, the street sign had clearly gone walkabout, so if it’s your first time to Anglesea Heath, then be sure to have the Parks Victoria map handy. A dust-mask might also be useful since the unsealed roads are extremely dusty when dry. You need to have your windows down to improve your chances of seeing/hearing birds so it’s not pleasant for asthmatics/hay-fever sufferers and your car’s interior becomes covered in a thick layer of dust. 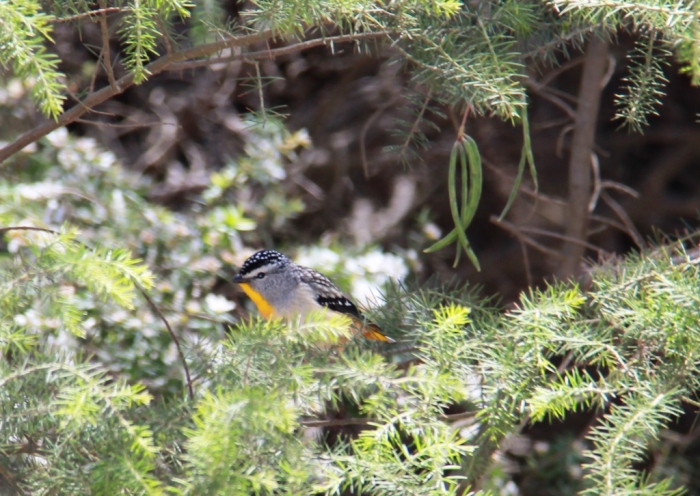 When I was researching a route for this Anglesea birding trip, I couldn’t help but notice a massive open-cut mine that was like a scar on the otherwise pristine landscape. Having only seen glimpses of the mine from Bald Hills Road, we really didn’t know what to expect, but when we took a left on to the aptly-named Coalmine Road, we were simply blown away by it’s magnitude.

As conservationists, we were quite apprehensive about the impact that the mine has on native wildlife, but we were pleased to see how much wildlife was thriving on the mine’s perimeter. In a patch of bush overlooking the mine, we ticked a Brown-headed Honeyeater and a Dusky Woodswallow while a pair of Yellow-tailed Black Cockatoos flew overhead. There had been many recent reports of Blue-winged Parrots along Coalmine Road, but we didn’t see any. Not surprisingly though, the next day we read a report of a group of 40 parrots feeding near to where we saw the honeyeater. Talk about dipping out! 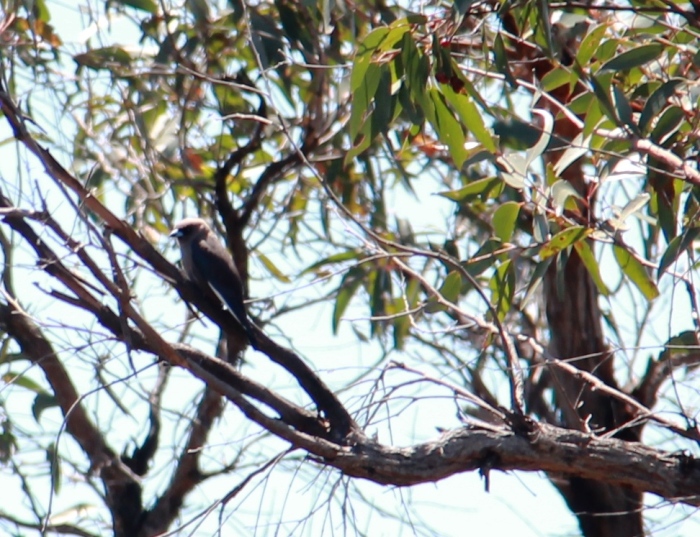 Dusky Woodswallow (not a canary!) in the coalmine

Further along Coalmine Road we stumbled upon a lake off to the right. It had the clearest, bluest water we had ever seen in an Australian lake, so we just had to stop for a picnic. The sign at the lake explained why the water wasn’t murky and why the area seemed devoid of animals: the lake contained acidic water from the coalmine and swimming was deemed to be dangerous. Over a relaxing mid-afternoon snack in the comfort of the car, we still managed to see a few Dusky Woodswallows, New Holland Honeyeaters and a lone Purple Swamphen. Like everywhere else in Anglesea Heath, there are no toilets here, so we headed back into town for a pitstop at the Coles service station. 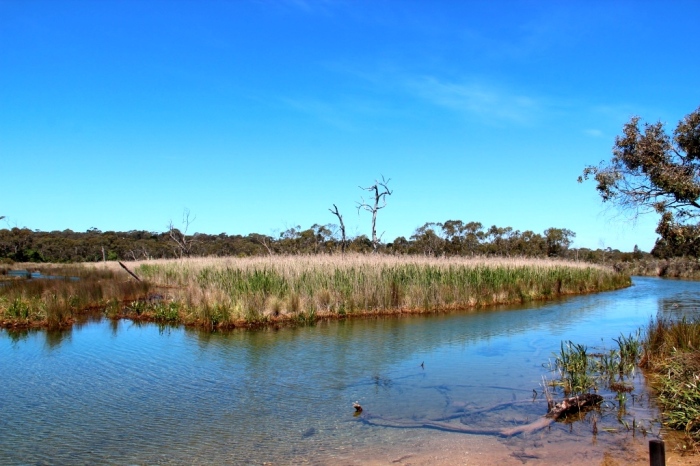 On leaving Anglesea, we drove along the Great Ocean Road towards Melbourne for about 7km before turning right on to Point Addis Road. We then drove a further 3km to the end of the road and parked in the carpark overlooking Bass Strait. We read that there were some forests along the road where Blue-winged Parrots were seen, but we were pretty exhausted by now and couldn’t be bothered looking for a walking track. We also read that Rufous Bristlebirds are regularly spotted in the car park and a few species of albatrosses were recently seen off the Point. Needless to say, we didn’t tick any of those species even though other birders saw them earlier in the day. We did see a few magnificent birds though, including those shown in the photos below: 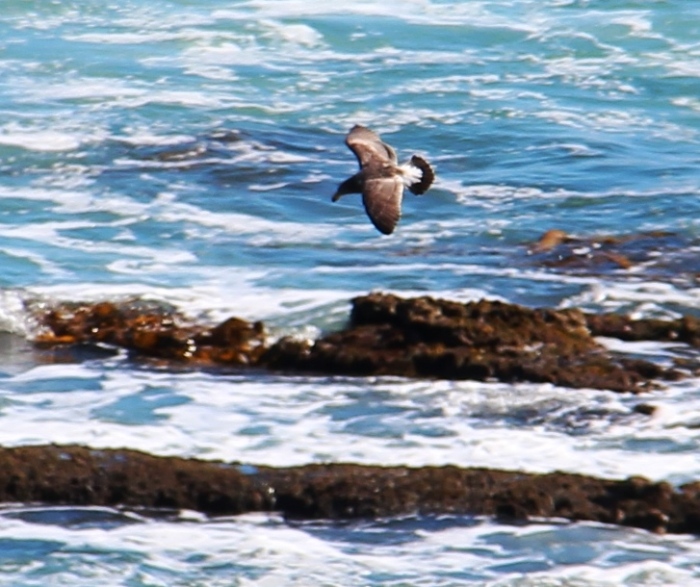 We were heading back to the car to call it a day when out of the corner of my eye I saw a ball of some sort rolling in the bushes next to the boardwalk: it was an Echidna! Echidnas are Imka’s favourite Aussie animal, not just because they are über cute, but because they are such unique creatures, being one of only two mammals that lays eggs (the other being the Duck-billed Platypus: another Aussie icon). In her excitement, Imka missed a once-in-a-lifetime photo opportunity of an Echidna… on a cliff… with iridescent blue water in the background. Instead, we had to settle for an out-of-focus photo of the Echidna retreating under the boardwalk. We were thrilled to see it sticking its long, anteater-like tongue up through the boardwalk, trying to eat the many insects crawling on the floor boards.

This will sound like déjà vu, but I swear that “we were heading back to the car to call it a day when out of the corner of my eye I saw” … a dolphin! I called out to Imka who was almost at the car by then, and she bolted back down the boardwalk to spot not one, not two, but a pod of 10 dolphins! With adrenaline now flowing freely, we forgot how exhausted we were and stayed for half an hour watching a mum and calf frolicking (tail-slapping and breaching) mere metres from the shoreline before swimming towards Bells Beach. Dolphins really are such amazing creatures. 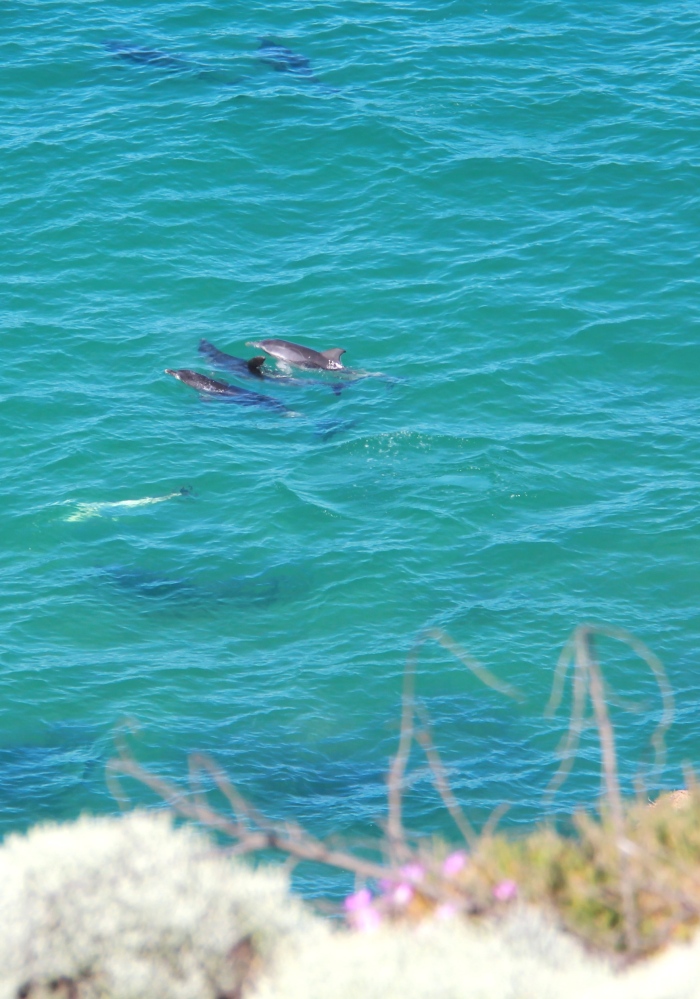 Although we dipped out on our targets and only ticked about 40 species of birds at Anglesea Heath and Point Addis, we were quite pleased with the deer, echidna, and dolphins: it just reinforces the fact that birding trips don’t always have to be about the birds – here in Australia, there’s wildlife at every turn! We can’t wait to do another Great Ocean Road trip.