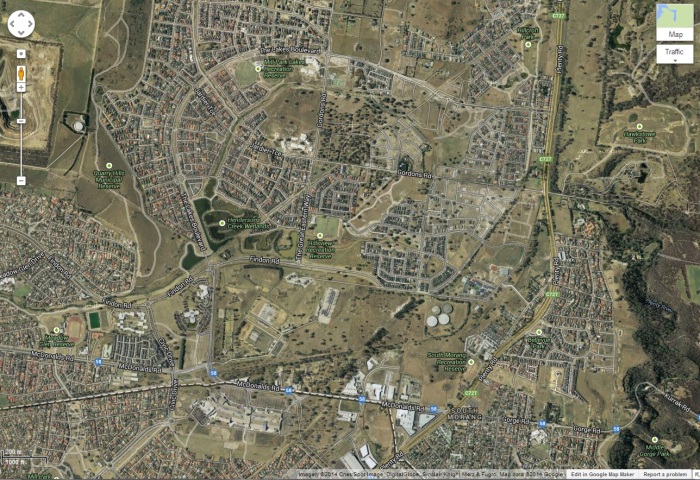 To get to the wetlands, take a left off Plenty Road on to McDonalds Road, passing the huge Westfield shopping complex on your left. McDonalds Road continues on to Ferres Boulevard with the wetlands just 200m north of the roundabout. Take a right off Mill Parks Lake Boulevard on to the red-bricked Promenade, parking in any of the bays, ideally facing the lake. (I didn’t need to ascertain the whereabouts of the ‘facilities’ in my two hours there, but I suspect that there must be toilets in the many restaurants and cafés lining The Promenade.)

Park facing the lake, and use your car as a bird hide

I visited at about 6pm on a Sunday evening, so I was not surprised to find the lakes packed with visitors: after all, there are hundreds of houses just a stone’s throw away. The lakes are clearly popular with families since there were at least a dozen adults and children feeding bread to the scores of birds in the main lake, plus at least 5 fishermen. This made bird identification much simpler, since they were mere metres away. I quickly ticked Black Swan, Hardhead, Australian Wood Duck, Eurasian Coot, Pacific Black Duck, Purple Swamphen, Chestnut Teal, as well as a Northern Mallard and white domestic duck (both non-native and introduced).

Waterfowl on the main lake

I was so focused on the ravenous waterfowl that when I finally scanned my surroundings, I realised that I was surrounded by numerous passerines, including Common Starling, Australian Magpie, House Sparrow, Australian Raven, Spotted Dove, Crested Pigeon, Galah, Red-Rumped Parrot, and Common Mynah. I had ticked almost 20 species in 5 minutes, and I hadn’t even left the car park!

As tempting as it was to lazily bird from the car park, it was the walk through the wetlands that yielded some surprising (and rare!) ticks. The paths through the wetlands are thin spits of land that often terminate in dead-ends, but it was definitely worth walking along each path, since each section of the lake had different species.

I decided to walk anticlockwise to avoid the fishermen, and ticked Welcome Swallow and Magpie Lark, before crossing the bridge near the weir. I was appalled by the rubbish that was allowed to accumulate under the bridge, but I was somewhat pleased to see healthy Purple Swamphens picking their way gingerly through the plastic bottles.

On the left (i.e. to the east) of the main lake was a line of trees and shrubs obscuring the view of another lake: the vegetation is usually quite productive for honeyeaters, but on this occasion I only saw Superb Fairy Wrens in the scrub and Rainbow Lorikeets flying overhead.

At the junction I came upon a large lake full of reeds and hundreds of birds. Dozens of species shared this wetlands, but it took more than half an hour of standing in one spot and scanning the lake with my binoculars to tick a few less-common urban birds. Within metres of each other were three cormorant species (Little Pied, Great, and Little Black), while a pair of Black-winged Stilts hunted for their dinners nearby. The white Royal Spoonbills, Australian White Ibises, and Eastern Great Egrets were easy to identify, but some of the other birds were a bit more difficult to differentiate for a relatively new birder like me. Indeed, with some species, appearances could vary depending on whether they are male vs female, breeding vs non-breeding, and adult vs juvenile. 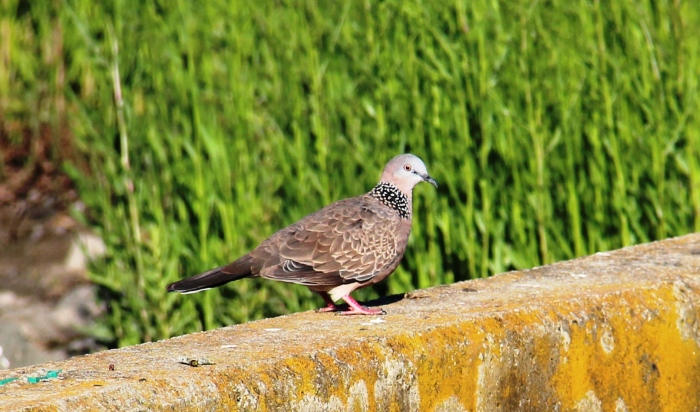 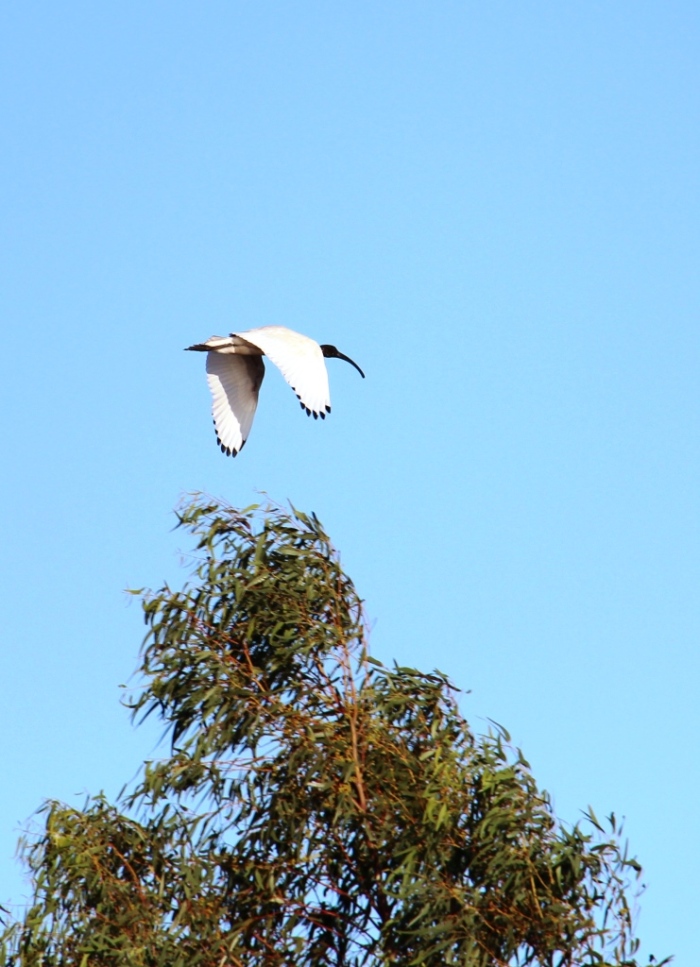 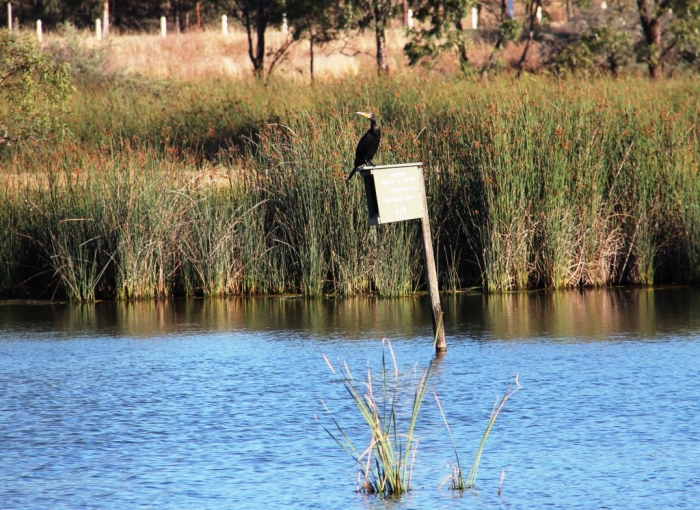 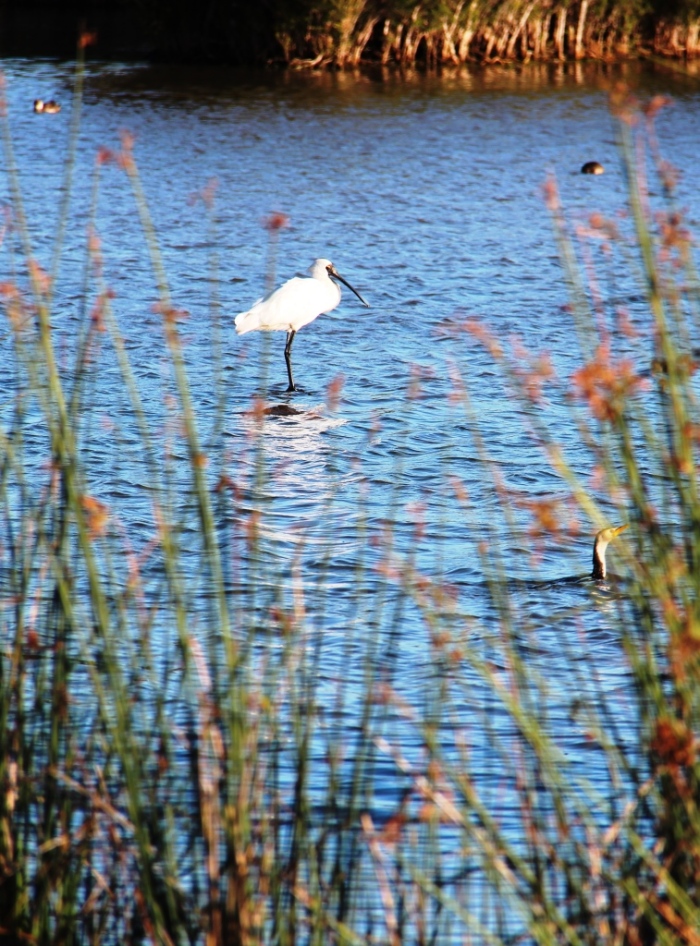 I was pleasantly surprised to see a Blue-billed Duck and a pair of Pink-eared Ducks, but I was even more elated to see a few Freckled Ducks! The latter is endemic to Australia and one of the world’s rarest waterfowls. According to Parks Victoria, the world’s entire population of less than 20,000 birds is “found in inland south-east and south-west Australia”. Avid birders have noted that they are being seen (in larger numbers and with increasing frequency) much further south than usual (and in urban areas!) because the long, dry summer caused much of their inland habitat to dry out. It is even more poignant when duck hunters mistakenly shoot them during Victoria’s 3-month, 10-duck-a-day-per-hunter duck hunting season. (If you do the math, that works out to a single duck hunter being legally allowed to bag almost 1,000 birds per year.)

Other than the Freckled Duck, there are at least 4 other species in frame

Without trying too hard, I recorded 34 species in an hour, with 20 of them being ticked within 5 minutes of arrival. Mill Park Lakes is a haven for dozens of species, and its existence is critical to the survival of one of the world’s rarest ducks: it’s definitely worth visiting year-round!

2 thoughts on “Mill Park Lakes – suburban birding at its best”