Located just 19km from Melbourne’s CBD, Banyule Flats Reserve is undoubtedly one of the most amazing suburban birding locations in Victoria. Over the years, more than 150 species of birds have been recorded (including a Painted Snipe in 2001), along with the odd Koala, and Eastern Grey Kangaroo mobs. The Yarra River forms the southern boundary, while houses, walking-paths, bicycle-trails, ovals, playgrounds and golf courses form the backdrop of many stunning wildlife and landscape photos. We were fortunate to have spent our first 5 years in Australia a mere 10 minute walk from this wildlife hotspot.

Blog posts abound with information about where to bird at Banyule Flats Reserve, so this post will focus solely on the annual ‘Breakfast With the Birds’ event. Held on a Sunday morning in October, the event is jointly organised by Banyule Council and Birdlife Australia. As far as I understand, Banyule Council funds a morning tea, manages registrations, and permits use of its building, while volunteers from Birdlife Australia play the roles of birding guides.

We attended the 2013 event on a very cold morning, wishing that we drove (and parked near the Old Shire Office off Beverley Road) instead of walking. By the time we arrived at around 7:20am, we were assigned to one of the last birding groups of the morning – the other groups were already on their birding adventures. Our Birdlife guide was a very affable and knowledgeable gentleman, who, though not too familiar with the lay of the land, definitely knew his birds! Our group of 10 novice birders were regaled with birding stories and factoids that have stuck with me ever since.

For example, although we have seen Crested Pigeons at every turn since moving to Australia a few years ago, our guide explained that they were previously confined to the arid interior, and their colonisation of urban areas (like Melbourne) only occurred in the last couple decades. You know those black, raven-looking birds that are sometimes hard to identify? Well, our guide taught us a neat trick to quickly identify them: check their eyes.

As we got closer to the billabong, one of our party asked our guide which bird was making the strange call that was resonating through the crisp morning air. “It sounds like a koel”, he said, “but they aren’t found here.” When we got to the billabong, there was a dozen birders, many with spotting scopes pointed at the water. The other birders confirmed that it was indeed a koel, and that it had flown overhead just minutes before! The birders were kind enough to allow our group to have a look through their Swarovski spotting scopes, and there and then I decided that I had to buy my own spotting scope. (See blog post here.) 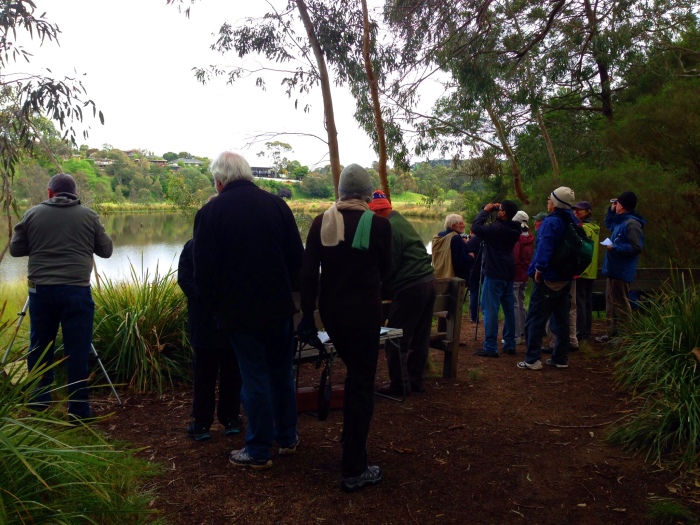 At the billabong, spotting scopes aplenty

After a couple hours of casual birding, we returned to the Old Shire Office for a massive spread of tea, coffee, pastries and fruits, in addition to a small exhibition about the the reserve – council rates well-spent in my opinion to promote socialisation and a better appreciation of our environment. We met dozens of fellow birders from all walks of life, and I used the opportunity to get a Birdlife member to identify some photos of waders that we took at the Western Treatment Plant the previous week.

The highlight of the day, however, was when the assembled groups did the ‘roll call’ of birds seen. The chair called out species of birds and the birders were encouraged to shout “yes” if it was seen, and state where it was seen. Our group only ticked a few dozen common birds, but we were very surprised that the groups that departed earlier than us (on different routes) shouted “yes” to Koel, Mistletoebird, and Restless Flycatcher – three species that remain elusive to us to this day! There’s always Breakfast With the Birds 2014 – you should register soon though, because numbers are capped at 100 and it gets filled quickly. **UPDATE: All 100 places were already filled by 6 October. There’s always 2015 to look forward to though!** 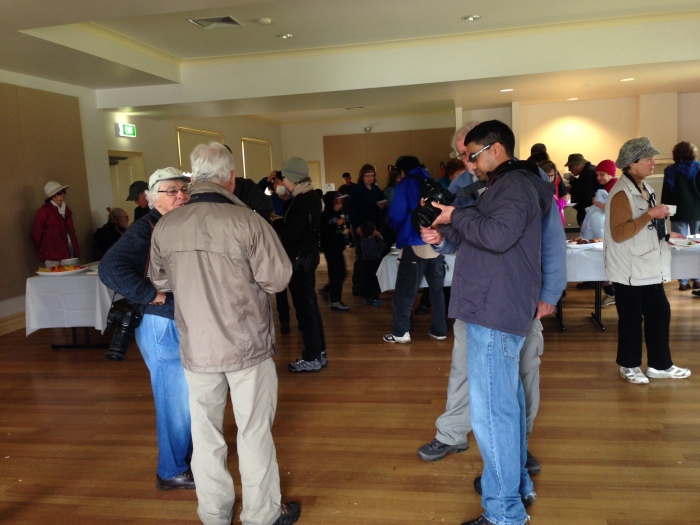