I don’t write a blog post about every birding outing because I just can’t write quickly enough. It’s not that we bird every second day, but I just can’t seem to find enough time to download and edit photos while crafting a semi-interesting account of our adventures, many of which are uneventful and disappointing due to the sheer number of dips. We do have a few bird photos that are screaming to be seen though, so in this post some lucky birds will finally see the metaphorical ‘light of day’.

This inland town was a two-hour, 170km drive from our house, so even though we departed at 7am, the supposed best window for birding had passed by the time we made a pitstop on the outskirts of Bendigo at a Hungry Jacks (also known as ‘Burger King’ in other parts of the world). The productive birding areas of Kamarooka State Park were another half an hour’s drive north, so we were fairly exhausted by the time we arrived at our first stop, and I was dreading the long day ahead and return journey. Being an inland town, it was between 3-5°C warmer than the coast, and on this New Year’s Eve, the temperature was set to hit 31°C in the park.

A few weeks earlier, I had met a young, very knowledgeable birder at Banyule Flats Reserve who emailed me some directions to birding hotspots in Kamarooka that we followed diligently. For the benefit of anyone who has never visited the area, here are his instructions, verbatim, (and yes, I did tell him that he should start writing his own blog!):

“To get to Kamarooka head north through Bendigo and turn left on the Bendigo-Tennyson Road. A great starting place is the Old Distillery Dam. To get here turn left from the Bendigo-Tennyson Road onto Campbell Road and head west for a few hundred metres, taking care to watch for a track on the left. Turn left onto the first track you get to and this leads to a series of dams. Around here there are Brush Bronzewing (along with Common), Red-capped Robin, Shy Heathwren and many Honeyeaters, including Yellow-tufted and Brown-headed. Look out for Purple-gaped, Yellow-plumed, Tawny-crowned and White-fronted although they weren’t around when I was there. If you head east along the old track from the dams White-browed Babbler is found along here. Heading futher west along Campbell Road you will eventually come to a section with very low scrub about 30 metres wide which is distinctly different from the surrounding mallee. This site is fantastic for Shy Heathwren along the parts where the forest meets the smaller bushes. White-fronted Honeyeater are often here, but weren’t when I went due to no flower on the bushes. Anywhere along Campbell Road look out for Inland Thornbill and Gilbert’s Whistler (although I haven’t seen the Whistler yet). Along Millwood road heading north the forest changes from low Mallee to taller, open Box woodland. Anywhere here is worth looking for Fuscous Honeyeater, Restless Flycatcher and White-browed Woodswallows. Along Millwood Road between Harrower Road and Camp road and on the western side of Millwood is where I found Chestnut-rumped Thornbill. It’s also great for the other birds I just mentioned. Camp Road is a great birding route also. You can find Jacky Winter, Brown Treecreeper and Peaceful Dove along here. Mulga Dam is great for these species and we also saw a White-bellied Cuckooshrike. The Mulga Dam loop is a signposted walking track on the opposite side of Camp Road to the dam. Towards the eastern side of this loop is where we heard the Crested Bellbirds. Burnside Road is also good for the species I mentioned along Campbell Road. There are also many other birds which I haven’t mentioned which are interesting.”

With a stellar promo for Kamarooka like that, we were quite excited at the prospect of ticking no less than a dozen new species. Of course, if you have been following our (mis)adventures, then there are no prizes for guessing that we dipped on almost all of the aforementioned species. The photos below document some of the birds that we saw – next time we should probably employ the services of the birding savant to be our tour guide! We were, however, happy with a few lifers, including Yellow-tufted Honeyeater, Jacky Winter and Fuscous Honeyeater.

Driving through the park 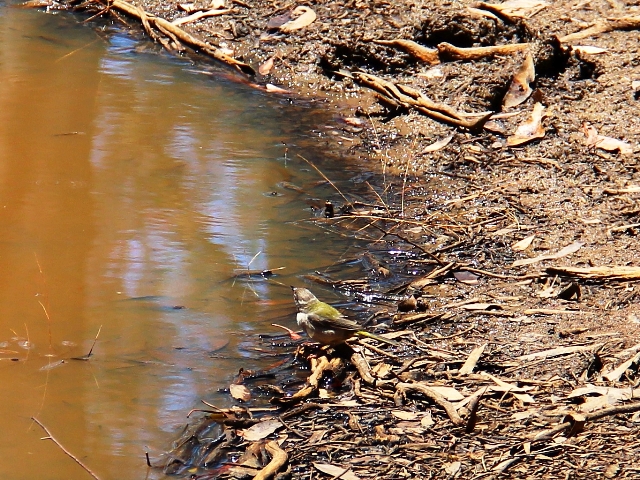 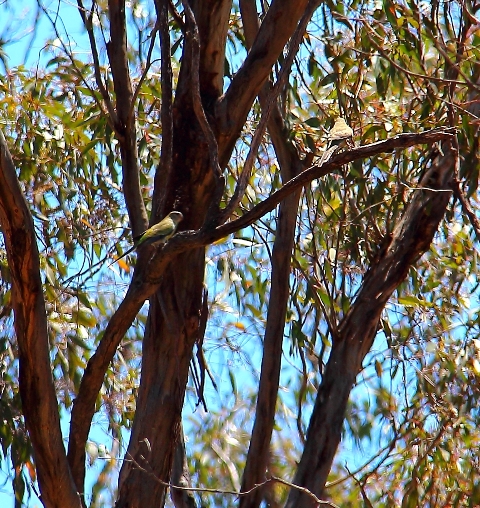 Since we don’t bird as often as we would like, I try to incorporate as many locations as possible into day-trips. There are pros and cons of course – we may have a lengthy day-list, but our birding is never focused enough to find our target species. Lake Connewarre was a known hot-spot for Orange-Bellied Parrots, Swift Parrots had been seen the day before in Ocean Grove, and even non-birders see Blue-winged Parrots and Rufous Bristlebirds at Point Addis: we dipped on all species!

Lake Connewarre and Reedy Lake are a series of shallow lakes just south of Geelong that masquerade as prime birding habitats for most of the year, but morph into a state game reserve during duck hunting season. What the latter meant was that when we arrived on a crisp, cloudless morning, there was already a motley collection of 4-WD vehicles and duck hunter caricatures. I distinctly recall the driver of one vehicle having a massive beard, while his toothless male passenger was shirtless – think ‘Cletus the Slack-jawed Yokel’ on a 5°C morning. A Parks Victoria official was inspecting their guns and permits (I assume) but that didn’t make us feel any safer – we didn’t want to get shot ‘accidentally’ as we crept through the bushes looking for parrots. Other birders have reported that hunters sometimes deliberately shoot over birders’ heads so that they get showered with pellets. Needless to say, we beat a hasty retreat from a very scenic location. 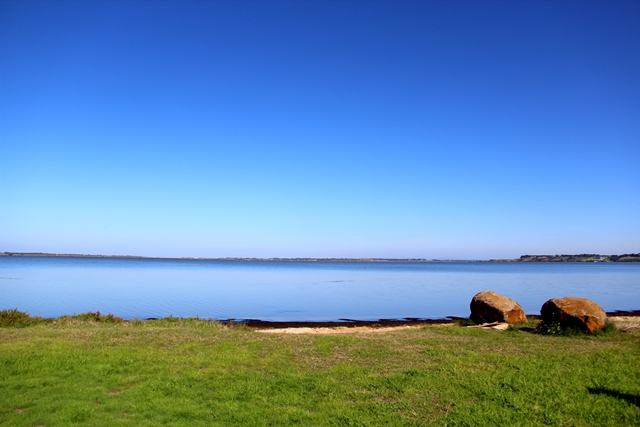 The hunters were in the water to the left of the frame, probably hunting Pink-eared Ducks

Our next stop was Ocean Grove – a rather posh suburb with some massive new houses near the mouth of the Barwon River. The Swift Parrots were reported to be in curb-side gum trees at the front of residential properties, but despite spending at least two hours looking for them, all we could spot were Musk Lorikeets. (What we didn’t know at the time was that instead of driving 125km from our house, we only needed to drive two kilometres a few months later to see them in Bundoora.) It was with mixed emotions that we spotted our first lifer for the day – a Scaly-breasted Lorikeet – in a tree that was earmarked for clearing to make way for a house. But, given that the exact scenario played out years earlier to create our own suburb, who am I to judge?

The day was still young, so we decided to push on to try for Blue-winged Parrots at the ‘Ironbark Park’ along Point Addis Road, Rufous Bristlebirds in the Point Addis carpark, and albatrosses out to sea. We dipped on all species, but found the trees and shrubs near the Ironbark carpark to be productive for small birds such as thornbills, and we ticked White-eared Honeyeater plus Eastern Spinebill. A stone’s throw from the carpark, the path continued straight ahead, but we were enticed by the prospects of seeing some lifers along the path off to the right (and down the hill). Not surprisingly, the path was remarkably quiet. We did stumble across a small pond at a junction at the end of the path which proved to be quite popular with birds such as Silvereyes and White-naped Honeyeaters. It was a long and disappointing ‘birding day out’ so I am sure that you can appreciate why it never got its own blog post months ago…

We took the path down the hill on the right. It supposedly makes a loop to return to the carpark.

A productive little pond, no more than 5m across at the time. 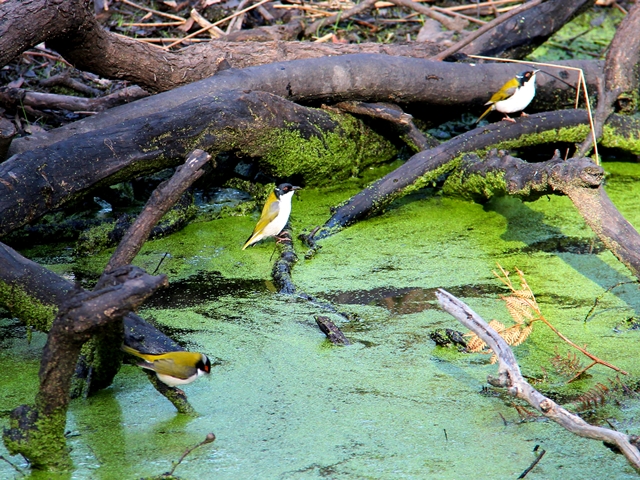 In retrospect, I have no idea why we visited Badger Weir! As you know, we try to visit new locations after reading recent reports of potential lifers, but I can’t recall what our target species were. Badger Weir is located in the hills near Healesville, and has some stands of my favourite trees: Mountain Ash. I find the cool, damp mountain air to be therapeutic, but Imka now hates it – more on that later. We were quite impressed with the picnic facilities, including, of course, functioning flush toilets, and we enjoyed watching the antics of the Crimson Rosellas and King Parrots who were clearly accustomed to being fed by the public. We did a loop walk for about an hour that varied in difficulty from relatively steep and wet, to a sealed road. We heard (but did not see) Superb Lyrebirds, and we got a fleeting glimpse of a Lewin’s Honeyeater – our first lifer for the day. Other birds included Eastern Yellow Robin, White-browed Scrubwren, White-throated Treecreeper, and a glorious, prolonged sighting of our second lifer for the day: Red-browed Treecreeper. We left on a high note, but our mood was soured when we got home, because Imka found a massive, blood-filled leech on her leg. The leech had clearly been feeding for at least two hours, and Imka vowed never to set foot in wet, temperate forests again. (Of course, since then I convinced her to visit Toolangi and Bunyip and we have successfully fended off the little blood suckers. Be on your guard though, because the bites cause allergic reactions in some victims, and get infected in others.) 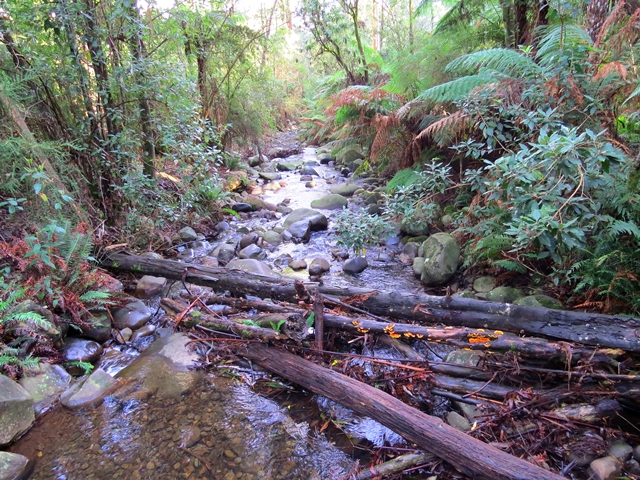 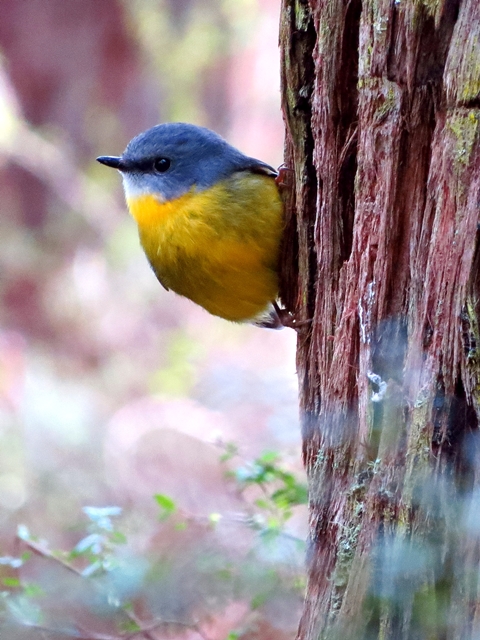 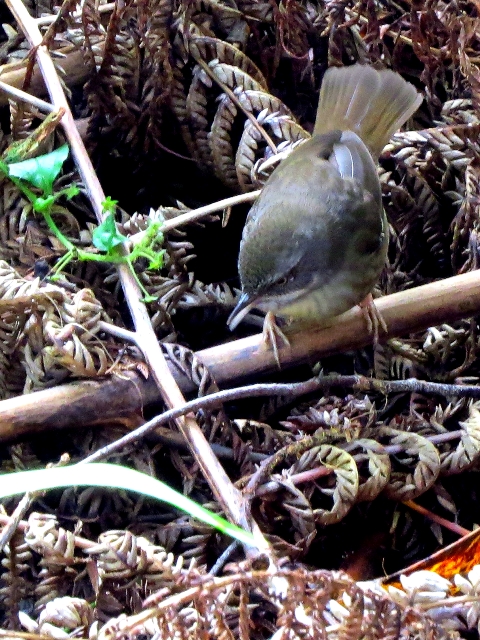 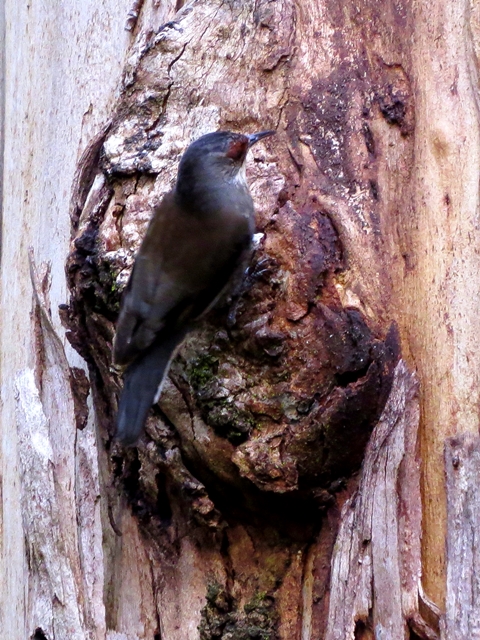