We last saw Swift Parrots in 2014 when they made an appearance in the carpark of La Trobe University (Bundoora), so I was eagerly awaiting their return to a nearby suburb – I love it when I don’t need to venture too far from my cosy bedroom in winter to see majestic birds! 🙂 In late April 2015, I was elated to read a report of a handful of Swifties in the trees in and around the Macleod Train Station. For the next few weeks the birds were not sighted, and then the same birder reported them again in Mid-May, this time in trees above the train platform! (Coincidentally, the report was made by a student of La Trobe University who also posted the first report of the carpark Swifties last year – I fondly refer to him as the ‘Swifty Whisperer’. :))

Swift Parrots are some of Australia’s most endangered parrots, with less than 2,000 left in the wild. They are one of only two migratory parrots (the other being the even rarer Aussie bird, the Orange-bellied Parrot) with some birds flying up to 2,500 km from southern Tasmania to winter in south-east Queensland. Contrary to popular belief, it’s not deforestation that is the main culprit leading to their demise: according to recently published research, it may actually be the introduced Sugar Glider in Tasmania that’s driving them to extinction by regularly eating 100% of eggs laid. Furthermore, one model predicts that Swift Parrots will be extinct in the wild by 2030. Consequently, this species had all the credentials for me to search for them at the crack of dawn on a cold, windy, and potentially rainy day: 1. Rarity, 2. Proximity, and 3. Imminent extinction.

I arrived at the train station at 7:30am in late May, and the only other souls around were station employees and weekend commuters. I spent at least an hour walking through the park, neck craned (and 600mm lens trained) skyward, but all I could find were Sulphur-crested Cockatoos, Galahs, Gang-gang Cockatoos (a treat in its own right), and very noisy Musk and Rainbow Lorikeets. Now if you have never visited Australia before, then you’re probably getting slightly annoyed that I can be so dismissive of seeing five species of parrots in suburbia without even trying. However, let’s not forget that Australia was known by early explorers as Terra Psittacorum – Land of Parrots!

There were no Swifties in the trees in the park or nearby school, and definitely none in the trees overhanging the train platform, where I received many stares from commuters who seemed uncomfortable with my binoculars and bazooka lens. The unkempt hipster on the platform, however, received no such wary stares, except, perhaps, from me. 😀 And so I dejectedly returned to my car, popped my camera on the back seat, started removing my jacket, when I happened to look up at a nearby tree, only to notice the silhouette of a slightly larger ‘lorikeet’ in the very poor light. I half-heartedly put the binoculars to my eyes, peered through, and my arms promptly turned to jelly: there was without doubt a red-throated, red-vented, Swift Parrot at the very top of the tree!

By now the wind had increased to a fresh 35 km/h, and the silent bird, apparently clinging for dear life to a very thin branch, swayed back and forth. To my surprise, I then realised that there was another bird underneath it, then another next to it, then another. About a dozen birds materialised before me – all probably coping far better with the strong wind than I was. The lighting was quite poor, and I couldn’t manage any half-decent shots, so I posted a photo to Facebook of the birds taken with an iPhone through my binoculars, much to the delight of birders, and drove home with a permanent smile on my face. Swift Parrots? Tick! 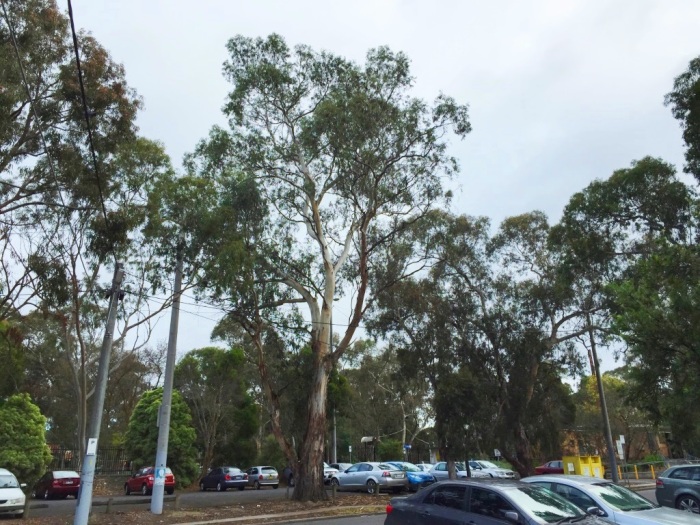 Birding alone is no fun, and I really wanted to share the sighting with Imka. The next opportunity we had to visit the site was a full week later, but we knew the birds would still be there because dozens of birders posted updates and marvellous photos during the week. Of course, given our birding luck, the Swifties were nowhere to be found at 4pm. It was like déjà vu the next week seeing a constant stream of Facebook photos of the birds in trees, drinking from puddles on the floor, and in-flight, so we vowed to visit again a bit earlier in the day.

Thankfully the sun was out that Sunday afternoon, and we were feeling confident. We scanned the treetops for thirty minutes before spotting a flock of parrots with red underwings flitting between trees: Swifties! We followed them to another part of the park where they hadn’t been reported before (near the block of toilets) and enjoyed prolonged and excellent views of them for another half an hour. We took dozens of photos of the 30-strong group, but only got two half-decent shots since the birds stuck to the canopy and focusing on the bird (as compared to a leaf!) was challenging.

The Macleod Swift Parrots became local celebrities, thrilling hundreds of birders from across Victoria and Australia, and they were even mentioned on the ABC news. As at 16 July 2015, they were still munching on lerp in the trees around the station, a full ten weeks after first being reported. While we don’t know how long they’ll stick around, residents and birders alike will do everything in their power to ensure that the trees are still standing when the parrots make their annual trip to the mainland. The suburb looks forward to welcoming them again in 2016. 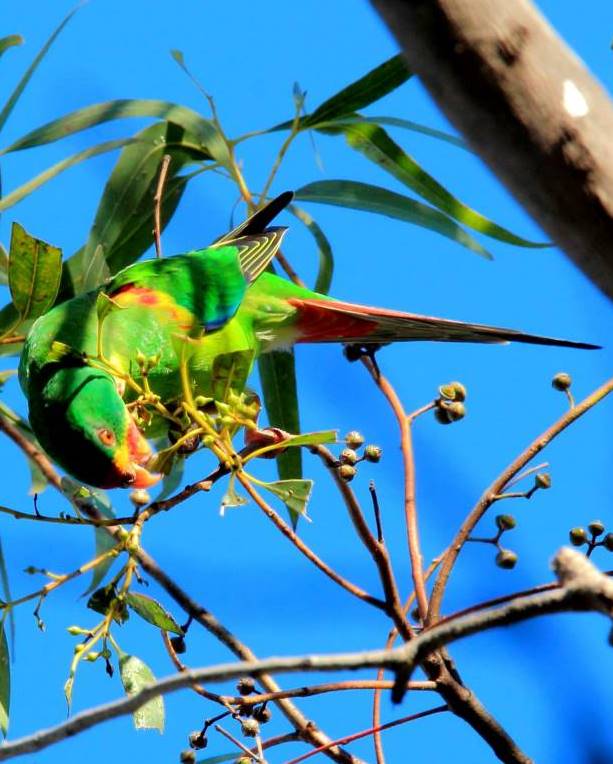 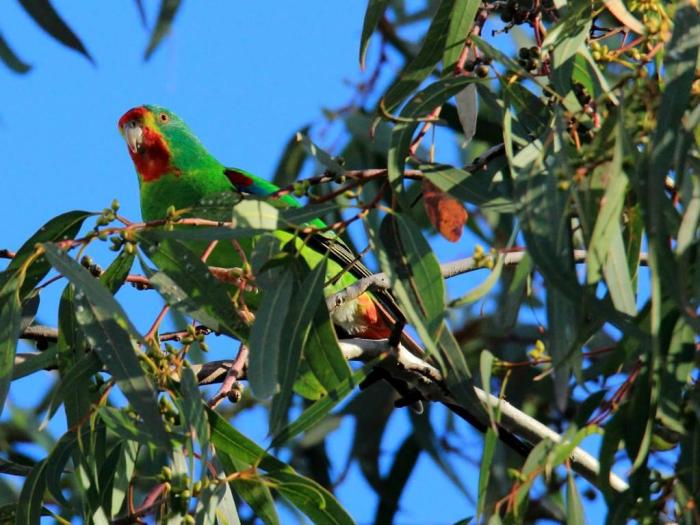