[Disclaimer: Our Tamron 150-600mm lens was being serviced, so we had to settle for a Canon SX50 ‘point and shoot’, as well as a Panasonic Lumix FZ200, hence the substandard quality of photos in this blog post.]

Whenever there’s a long weekend in Melbourne, we always try to bird further afield. So, on the newly announced ‘Footy Grand Final’ public holiday, we decided to try our luck in Bendigo and environs. The three birding sites we chose were:

I spent a few hours reading online resources and exchanging messages with fellow birders on Facebook, whilst making notes on a Google Map (read: GPS coordinates): who wants to dip after driving for two hours, right? The most useful online resources for Kamarooka were: 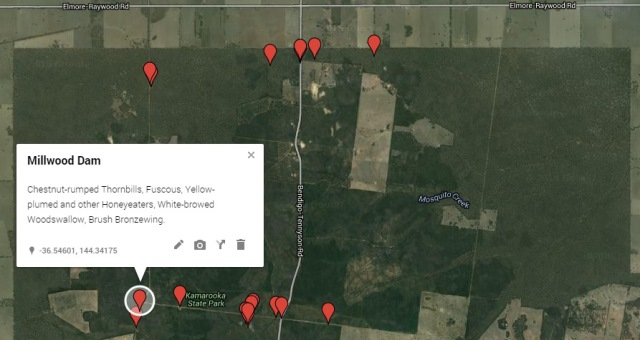 Our first stop (after the mandatory rest stops), was No 7 Reservoir, just south of Bendigo. We had visited here some months ago and dipped on the Chestnut-rumped Heathwren, so, armed with excellent directions, we wanted to give it another shot. Driving through Granter Road on the way to the reservoir, we ticked White-faced Heron and Masked Lapwing in the paddocks on the left, as well as a Blue-faced Honeyeater in a resident’s backyard. The only reason we planned to visit Lake Weeroona was to see these honeyeaters, so with this species ticked, we didn’t need to waste time at the lake. In recent months, bitterns were reported there, but with a long day ahead of us, we needed to stay focused.

We spent 45mins searching for Chestnut-rumped Heathwren in the hilly area to the south of the reservoir, but were unsuccessful again. Despite a local birder’s excellent directions on two occasions, this bird is now officially a ‘bogie bird’ and we hope to find it before the end of 2015. Our consolations were Black-fronted Dotterel, White-eared and Yellow-tufted Honeyeaters, as well as a White-throated Treecreeper that was flitting back and forth between what I presume was its nest.

No 7 Reservoir: The white/grey pin is where the Chestnut-rumped Heathwrens are (either side of the channel) 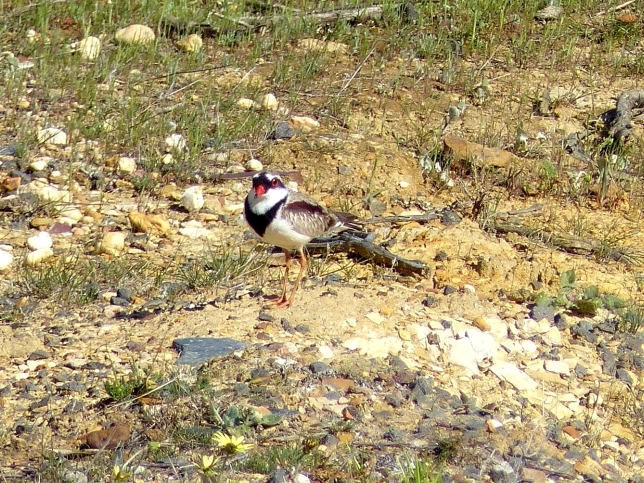 We made a pitstop at the Hungry Jacks (i.e. Burger King) in Lansell Square Shopping Centre for an early ice cream, and about half an hour later we entered Kamarooka State Park. We turned left into Campbell Road and parked less than 50m from Bendigo-Tennyson Road. The first bird we saw out of the car was a White-browed Babbler – the first lifer for the day – quickly followed by three more lifers: Tawny-crowned Honeyeater, Inland Thornbill and Variegated Fairywren. The Babbler, Tawny, and Thornbill were relatively easy to spot since they flitted from tree to tree and perched on branches, not that it was any less thrilling to see them of course. The Fairywrens, however, were extremely difficult to locate, even with their constant calling, because they kept to the dense shrubs close to the floor and it was impossible for the camera to focus on them. With an hour gone in the blink of an eye, we bid goodbye to a very vocal Horsefield’s Bronze Cuckoo, and proceeded to the Distillery Dams.

Tawny-crowned Honeyeater – you can see how it got its name 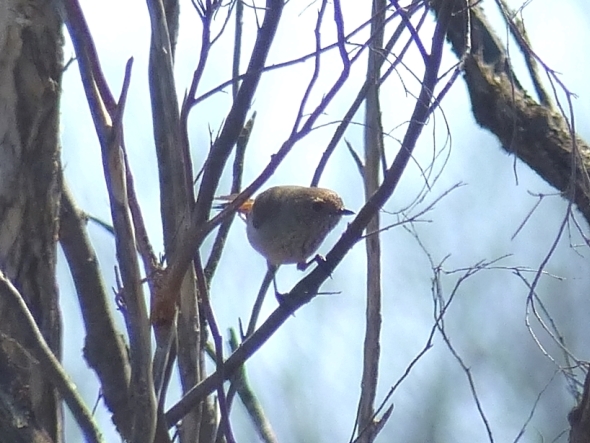 Approximately 600m further along Campell Road is the ‘blink and you’ll miss it’ entrance on the left to the ‘Distillery Dams’. Our target here was Brush Bronzewing, and although I think I saw the flash of brown wings behind the two dams, I wasn’t prepared to call it. We were quite pleased with our first sighting of a Jacky Lizard which compensated for the swooping Masked Lapwings who were actively protecting their nest. By this time it was already 31C so perhaps the honeyeaters thought it too hot to venture to the water’s edge, because we only saw a lone Tawny-crowned Honeyeater drinking from the main dam.

Then we were off to that special place along Campbell Road where the vegetation and soil type changes. Although a birder had supposedly seen a dozen species here recently and patiently gave me perfect directions, GPS coordinates, and a Google Map screenshot, I must admit that I had my doubts about the prospects of seeing anything at all. Boy was I wrong! Within minutes, an apparent barren landscape was buzzing with life, as birds flitted over my head, past my ears, and through the undergrowth. We saw a Golden Whistler, Variegated Fairywrens, Purple-gaped (lifer), Fuscous (lifer), White-eared, Tawney-crowned, Brown-headed and White-fronted Honeyeaters (lifer). I spent more than an hour in the blistering heat and didn’t want to leave!

Bendigo-Tennyson Road on the far right, Distillery Dams near the centre-right, and the ‘special’ spot is the clearing on the far left 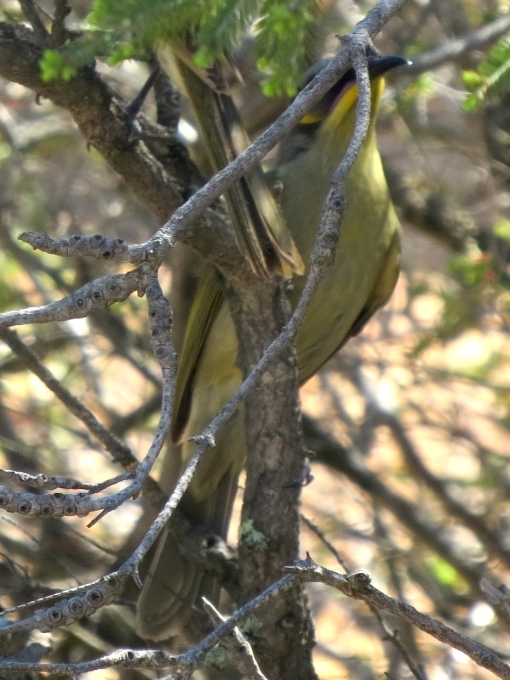 Purple-gaped Honeyeater – you can see how it got its name 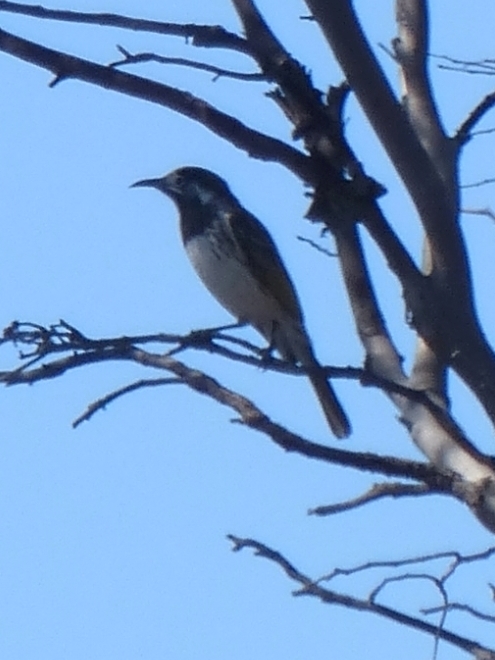 When we eventually did leave, our next stop was a little dam on the left of Millwood Road, about 600m south of the Campbell-Millwood junction. I am not sure if this was the ‘Millwood Dam’ referenced in the literature, but it seemed quite far south of Campbell Road, and there was no dam that was any closer. Nonetheless, we were quite pleased to see a Swamp Wallaby in the water that didn’t seem fazed by us at all. Fuscous and White-plumed Honeyeaters kept flitting to the water’s edge to drink, but those were the only species we ticked there, despite hearing the calls of other indeterminate birds. 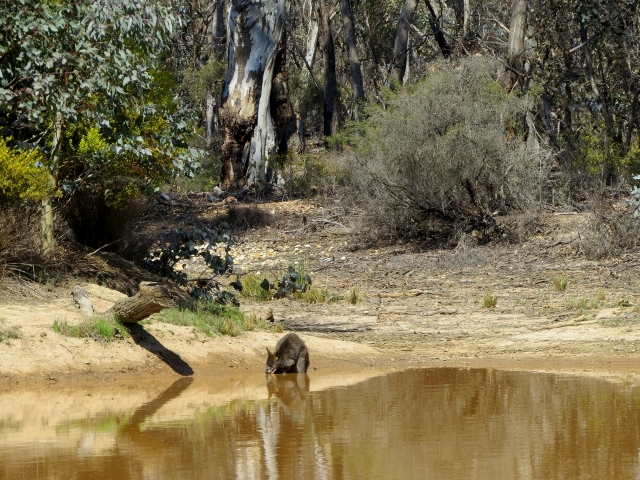 Swamp Wallaby cooling off in the 32C heat

We then proceeded north on Millwood Road and stopped where the two farms on either side of the road met because we wanted a better look of what we thought was a Brush Bronzewing (it was a Common…). We happened to look down and were surprised to see a slow-moving Shingleback Lizard just to the side of the road. We had seen them before in captivity, but this was a first for us in the wild. We have a “don’t touch, no selfies” wildlife policy, so we left the little critter in peace. 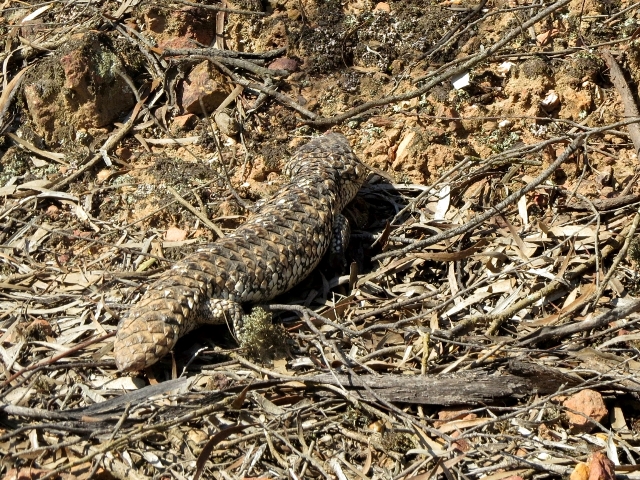 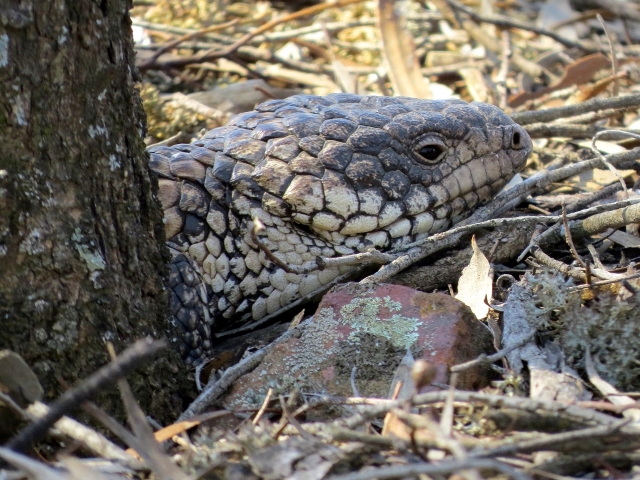 Our stop at a little dam on the right, just 50m south of the Camp Road entrance, was not very productive (just a Striated Pardalote), so we decided to move on. Instead of turning into Camp Road to bird the Mulga Dam, we continued north on Millwood Road, turned right on the sealed Elmore-Raywood Road to quickly traverse the width of the park. Our intention was to access Camp Road to the east of Bendigo-Tennyson Road to try to find Peaceful Doves which the literature suggested were common in the northern section of the park. 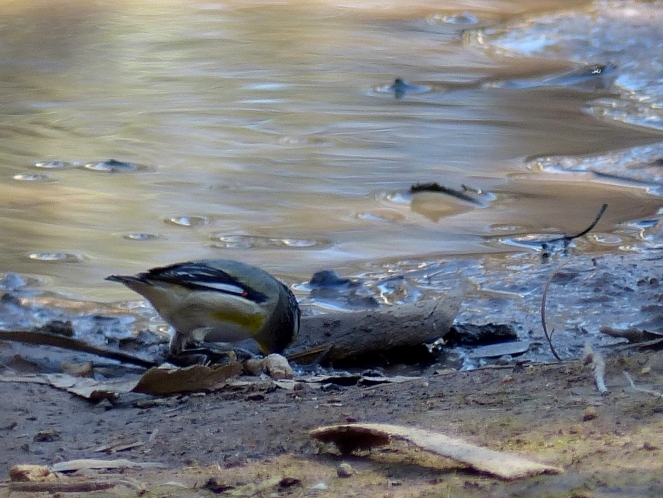 While driving along Camp Road, not 50m from the start, I spotted up ahead what I thought was a snake in the bushes, and my heart skipped a beat when I saw it scurrying up a tree. I inched the car forward, hoping it wasn’t a highly venomous jumping snake. 😀 “Hang on”, I thought, “snakes slither, not scurry.” When my eyes focused on the moving object, the ‘snake’ really was the tail of a huge lizard, almost 2m long: the Lace Monitor became our third lizard lifer for the day! We drove slowly past it as it blended in perfectly with the tree trunk – perhaps it’s an ambush predator. 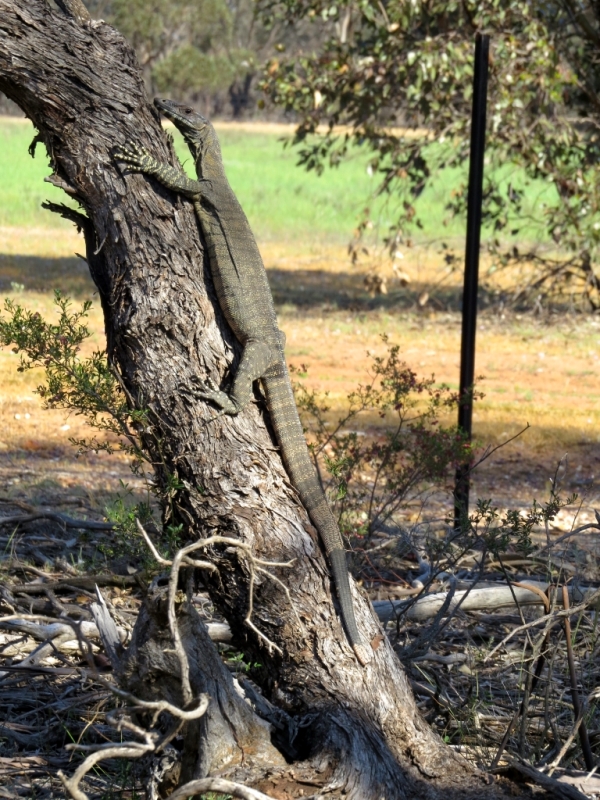 We drove another kilometre or so along Camp Road, ticking a vocal Black-faced Cuckooshrike and a curious Diamond Firetail, before coming upon a small dam where we hoped to find Peaceful Dove and Hooded Robin. Of course, we dipped on those (I didn’t want to tick a grey dove-like bird I saw flying off) but ticked a Jacky Winter, a few honeyeaters, including Fuscous, White-plumed, Brown-headed and our 8th lifer for the day – a Yellow-plumed Honeyeater – before we left a most amazing part of Victoria to make the long journey back home. Eleven lifers (8 birds and 3 lizards) were well worth the 400km, 4.5hr round trip! 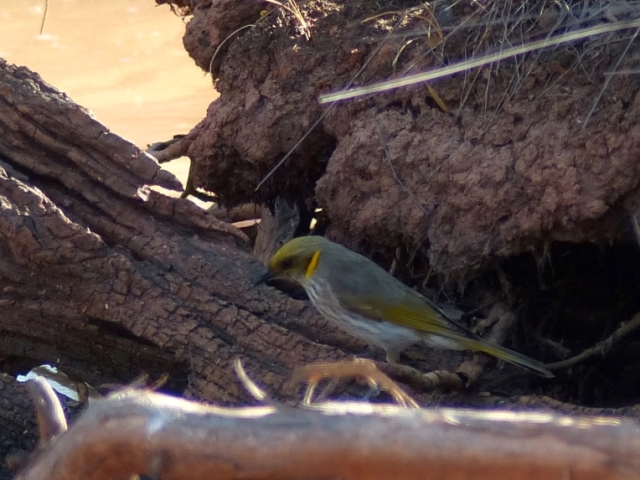